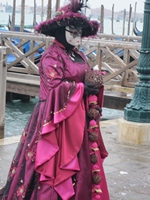 The Benandanti were peasants. Their aim was to get wealth in that situation in which they lived. They believed that their conditions of life were the best imaginable conditions, so they wanted to preserve them from Witches and Sorcerers (who the peasants believed to be evil creatures) who were trying to change social, magic, philosophical, moral balances, leading them into an unknown: peasants feared that unknown!

The Benandanti, unlike Witches and Sorcerers, were able to alter their perception, to produce their luminous bodies and enter some worlds of magic, but they hadn't the discipline to discern the differences between the everyday world and the worlds of perception, to choose times and ways to enter those worlds, nor to look at the time that came towards them and the changes that the actions done in worlds of magic would have introduced in everyday world.

The plain of Giosafat or other places in which they fought, for the Benandanti were physical places somewhere on the earth, they weren't field of energy. The Benandanti represented their power with broomcorn canes (broomcorn, or sorgho, is a so powerful grass that grows well even on unwatered grounds) and their determination to preserve the present was represented by christ's flag.

They feared the willing of Sorcerers of changing the present, of leading Human Beings into a unknown future they feared.

When a child was born so, he or she was educated to alter the perception in order to fight Witches and Sorcerers in a period called of the Four Ember Days, but just in that period of the year.

Witches and Sorcerers were led by a mask: Arlecchino.

Arlecchino was considered an evil spirit. As a matter of fact, that mask was put on by a Witch or a Sorcerer who, along her/his path to Knowledge and Awareness, would introduce variables inside the Social System in which he/she lived, so that she/he could change some balances and build the series of changes, in order to pursue aims that stayed into the time which came towards he or she, so those aims were unknowable and dreadful for the Benandanti.

If they won that battle, that ARLECCHINO would overcome the forces of magic which could stop his/her aims; if that ARLECCHINO lost that battle, he/she could do nothing else than help other people to become Sorcerers and place in them the hope of that change, which the time that moved towards him/her indicated as a necessity.

ARLECCHINO is a mask. In Italian comedy he's the clown, the stupid servant or the smart servant who is at the end humiliated by the master. In Goldoni's comedy and in popular comedy they say, to summarize the character: "Son Arlechin batocio sordo de 'na recia e orbo de 'n ocio" (venetian dialect)which sounds like that: "I am Arlechin batocio, deaf in one ear, blind in one eye" (the word BATOCIO is used with two meanings, the former is original, the latter is used to smooth the scurrility of the former. Originally, the word batocio indicated a brush used by boatmen to clean themselves after they had defecated; in the most common meaning batocio is the clapper of the bell, as Arlecchino's head was stunned by too many blows. Both the meanings indicate that Arlecchino represented himself on the lowest steps in the social stairs!)

This is what Castaneda calls Controlled Madness!

It's the practice to conceal our own power and determination with representations of powerlessness, stupidity, clowning and vulnerability. This practice was very well known, in ancient Paganism. Just to make an example, the passage from monarchy to republic in the ancient city of Rome was done by Brutus (the fool, the stupid) who, with the help of GODS, built the strategy and waited for the moment to overthrow Tarquin the Arrogant.

This practice was very diffused in the Middle Age. They protected themselves becoming "basabanchi" (bigots), pretending faith and submission and building rebellion.

The mask of ARLECCHINO is put on by every Apprentice Witch or Sorcerer whose activity introduces variables of FREEDOM inside the Social System in which she or he lives. That battle is a display of his/her Being Power, Aim and ability to call the GODS of the objectivity in which he or she acts, so that the GODS will support him/her.

Historians indicate the exploits of the Benandanti as a cultural transformation of nordic traditions. They speak about Wotan's warriors who become evil beings as they are dead and without a burial. This is a cultural matter.

The Inquisition persecuted the Benandanti and imposed on them its own interpretations. The Benandanti give up self-affermation and, at the end, they accepted to be what Catholic Inquisitors wanted them to be. Torture can do this and more! Catholics destroyed a tradition that preserved their power. But Sorcerers and Witches who build the future weren't helped by this.

There is always someone who is terrorizedby changes and wants to preserve the present; there is always a Witch or a Sorcerer who is ready to put on her/himself the mask of ARLECCHINO in order to build the future and nourish FREEDOM among Human Beings.

Then, when we go to the theatre, we can laugh a lot at the stupidity of ARLECCHINO! 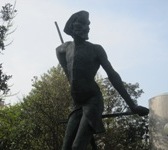