THE INTERPRETATION OF DEITY GAEA! 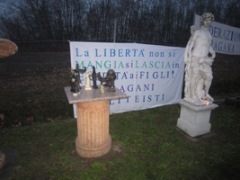 An outstanding matter: the interpretation of Deity Gaea!

Sometimes, someone deceive himself and those who want deceive him profit from this self-deceiving.

Verily at the first Chaos came to be, but next wide-bosomed Gaea, the ever-sure foundations of all the deathless ones who hold the peaks of snowy Olympus, and dim Tartarus in the depth of the wide-pathed earth

Gaea first bare, equal to herself, Starry Uranus, to cover her in every side, and to be an ever-sure abiding-place for the blessed gods. And she brought forth long Mountains, graceful haunts of the goddesses- Nymphs who dwell among the glens of the mountains; she bare also the fruitless sea with his raging swell, Pontus, without sweet union of love;[ů]

Where is the preconceived idea which puts the basis for self-deceiving?

Itĺs the identification of Gaea with the EARTH!

Why do we have this self-deceiving? Because those who comment believe themselves to be a central element in universe. They think Starry Uranus is something ôdifferentö from Earth. When it is said that Gaea bare Starry Uranus, the commentator looks at the sky. He imagines the sky, Starry Uranus, to be a corollary functional to Earth.

The commentator put himself ôon the centre of universeö and from there he sees everything moving and functioning for his centrality.

But Hesiod didnĺt say that!

All is done by Hesiodĺs interpreter!

Letĺs try to take us out of the worldĺs centre and see the earth as a component of Starry Uranus whoĺs born from Gaeaĺs hearth!

What is the correct interpretation of deity Gaea?

Gaea is the substance on which the present, every present, expresses itself!

What do these verses mean? They mean that the SUBSTANCE on which every DEATHLESS ONE expresses his/her SELF-CONSCIOUSNESS (I mean the ôI amö that separates a subject from what surrounds him) is inside a structure given by GAEA!

Thereby it is logically said that ôGaea first bare, equal to herself, Starry Uranusö

The word STARRY points out the multiplicity of his existence inside an overall view that is the universe as we see and know it today. And it goes further, giving sense to the verse I commented before, ending with: ôto be an ever-sure abiding-place for the blessed godsö

So, what deity can be identified with the Earth Being?

Itĺs Rhea who put the basis to become fertile by the union with the time (CRONOS)!

Itĺs interesting to observe how the time prevents the children he generates to become fertile and that only defeating the time, bending him to his needs, the atmosphere, ZEUS, become able to make the Earth fertile. Only ZEUS can feed the Nature Being, HERA (all HERAĺs children breath and can live ONLY breathing) and only ZEUS can allow HESTIA, DEMETER, HADES and POSEIDON to express themselves!

But when she was about to bear Zeus, the father of gods and men, then she besought her own parents, Gaea and Starry Uranus, to devise some plan with her that the birth might be concealed, and so her dear child, so that he might placate her own fatherĺs Erinyes and the childrenĺs who great and crafty Cronos had swallowed down. And they heard their daughter and obeyed her, and told her all that was destined to happen touching Cronos the king and his stout-hearted son.

What they told her was the possibility life manifested herself on planets when the atmosphere would have taken possession of time (CRONOS).

What was important to Rhea was the birth of life on the planet of which she was the Consciousness herself: RHEA IS THE EARTH!

The ancient ones deceived themselves!

Someone took possession of their deceiving and added its own deception subjugating Human Being: exploiting their egocentricity to impose on them the idea of being created in a mad godĺs own image and likeness!

This way of thinking leads us to consider Gaea in a different way. In a very nobler way, and so becomes nobler Rheaĺs aim, to bring her child to take possession of TIME!

We can honour the Gaea-oppotrunity we are, by making her to become, through our actions ôever-sure abiding-place for the blessed godsö