FREEDOM IN ANCIENT RELIGIONS AS A FOUNDATION OF POLYTHEISTIC PAGANISM 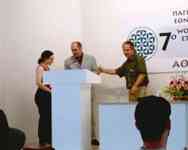 We have always asked ourselves what are the characteristics of the unity of people showing feelings typical of Ancient Religions, since we know that Ancient Religions' ways differ among individuals and traditions.

Some traditions are very different, but today there is a feeling of love and passion joining all the people practising Ancient Religions; as if in diversity shows up something common which spectators can't see, but it's something evoking Ancient Religions and every person keeps it in their heart as a personal treasure.

This treasure is what makes equals in diversity every woman or man who shows today her/his feelings and this is what links them to Ancient Religions.

I use many names and many images to describe this treasure living inside every woman and man practising Ancient Religions according to her/his likes, but during my research a particular image struck me; now I want to recall it, as a tribute to Greek Ancient Religions, by Hesiod's words:

"Forthwith she made the element of grey flint and shaped a great sickle, and told her plan to her dear sons. And she spoke, cheering them, while she was vexed in her dear heart: "My children, gotten of a sinful father, if you will obey me, we should punish the vile outrage of your father; for he first thought of doing shameful things." So she said; but fear seized them all, and none of them uttered a word. But great Cronos the wily took courage and answered his dear mother: "Mother, I will undertake to do this deed, for I reverence not our father of evil name, for he first thought of doing shameful things" So he said: and vast Earth rejoiced greatly in spirit..."

From Africa to Iceland, from America to Australia, to Japan, every person who links him/herself to Ancient Religions pronounced Cronos' vow once in his/her life, and so awoke the Cronos inside him/her. And this Cronos led them to act. Maybe no one can know how many names this Cronos has in people's hearts, but every person knows the name of his/her own.

Everyone of us fulfilled and still fulfills this vow with his/her hands and with the possibilities related to social and cultural situation in which each person lives.

This vow makes us equal even in diversity. Equal for aims, different for the way we call and honour the GODS in the surrounding world.

This precious thing lived in people's hearts for 17 centuries, and it whispered voices of freedom in their ears, even when forces asking for submission were strong.

We should be proud of the contempt Christianity showed to us, because of our passion and attention for life and well-being of society we belong to; in fact in Matthew's gospel we read:

Now is our turn to be concerned about the wealth of present societies in which people who practise the Ancient Religions are awakening the feeling and the memory about the GODS.

Everyone of us grasps Gaia's sickle and says to her:

"I will undertake to do this deed, Mother..."

This is what joins together all people practising Ancient Religions in every land and of every tradition; and it's grasping Gaia's sickle, for what I can do, that I greet and honour every person who takes part in this Congress.

I would like to thank our Greek friends for giving me this opportunity.

To construct Polytheistic Paganism and Witchcraft.