Preface to the analysis of Hesiod’s Theogony

Pagan Religion talks about the reality of the Gods 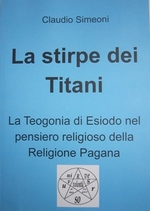 The Human Being looks at him/herself!

S/he perceives his/her own existence as a part of the flux of time and changes!

The Human Being looks at his own hands through the eyes imposed by reason!

There was a time in which the description made by reason didn’t close human perception in a form. There was a time in which the world itself was time and inside it the emotions of humans capitalized their actions and changed them. Then, reason took over and both action and emotion were locked up into a form. Human reason separated mankind from the change of time and from the emotional bound which, in billions of years, allowed human being to live, communicate and change without the need to describe the world as an ensemble of objects with quantity and shape.

The poet gives images and human features to what isn’t human. He expresses features typical of Human Beings and relates them with the emotional features he perceives in the surrounding world. In those features he recognizes their intelligence, aim, determination. Human Beings recognize in those features the forces that produced, or allowed with their presence and choices, the present moment. From the world of perception to everyday world, from everyday world to the world of perception; the Human Being swings like a pendulum looking at his/her own hands by which transforms the shape of the existent. The Human Being collects phenomena and describes them; collects descriptions and looks for the phenomenon that originated a description.

Coming out of coercition in which reason imprisoned his perception doesn’t imply freedom in the immense, but leads to coercition into bigger spaces. Coming out of this coercition is once again not leading to freedom but to coercition into bigger spaces! Isn’t it possible to come out of coercition? Only the death of physical body allows the Beings of Nature to come out of the conditions Zeus built so to allow those born into Nature to build in turn their luminous body and to turn the death of physical body into the birth of the luminous one they shaped and constructed along their life, choice after choice. What is possible is the struggle to get bigger spaces for our perception to run. This effort, made by a Being of Nature, every Being of Nature, whatever its species may be, in every moment of its everyday life, is his PATH OF FREEDOM.

What is the Beings’ freedom in Pagan Religion? It’s the activity through which the Beings expand themselves, their corporeality, their knowledge, their awareness, their culture, etc., growing day after day until the death of physical body.

Every Human Being’s efforts bring to the Freedom of which they are expression or, because of their choices, bring the Human Beings to distruction! The choice of the direction in which to change belongs only to the single Being of Nature. Only to him/her!

While an individual’s freedom changes the individual by making him grow and is a choice pertaining to the individual in the objective conditions in which he was born, slavery, that is giving up the freedom of growing, on the opposite is imposed on a single Human Being by external forces whose aim is to seize him and make him act according to an external will. Imposing submission forces the individual to give up expansion in life, constraints his psychic energies into imagination of a fantasy world in which coercition covers the slave’s intuition, leading him into dead ends where the energy and the activity, which will normally allow him to grow, exhaust in the attempt of giving a shape through description to the unreal imagination to which the slave is forced to aim.

This is the reason why even the swing of that great pendulum that is human judgement, going from the phenomenon to the form and from the form to the phenomenon, is an activity of freedom that demands Human Being to express it in his actions, widening the bounds of the educational coercition he underwent to.

Like many studies are nowadays demonstrating, Hesiod’s Theogony isn’t a poetical invention entirely by Hesiod, but has been inspired by middle eastern mythological traditions, adapted to fit Greek culture. Hesiod takes what is presented to reason and uses it to describe what perceives. The perceived takes form and representation in every single culture and reaffirms perception through description. The description is a limitation of perception. To be allowed into a description, perception must be limited and defined into narrow walls. Description should serve as construction material for steps of the stair of knowledge and awareness other people can climb so that to nourish their perception and open new horizons.

Hesiod takes from the surrounding accomodating what he takes into a cultural description that gives shape to his own perception. Through description he mediates so that to transfer his emotional perception of world and of changes to the world of reason. It is now ascertained that Hesiod’s system has been influenced by ancient sacred tales from middle east. These tales belonged to different people, like the Hittites, the Hurrites, the Sumerians, since the third millennium b.c. We don’t know who built or when was built the structure of Hesiod’s Theogony. For sure this structure is more ancient than those Indian traditions which, a century ago, were believed to be the origin of European social and religious structure.

I already wrote about this theogony when I presented a brief analysis of various paganism in the preface to The Sorcerer’s Crucible in the Four World’s Songs. Here I want to make you understand how Hesiod’s Theogony is an integral part of the great religious breath from Babylon through Egypt to Cretan Mediterranean Sea, involving all ancient civilizations that turn their perception into a specific culture. All ancient civilizations were linked one to another. Even though we have just fragments of one civilization and have lost everything of another, this doesn’t imply that the first one was the main civilization in the ancient culture. It just implies that the sequence of changes allows us to reconstruct a part of those cultural paths through which the perception (intended as perception of phenomena out of the world of reason, form and quantity, in the infinite ways we can perceive the world in which we live) has been turned into a shape to make it a part of those cultures and thought.

There was a time in which there was the nothingness. It doesn’t matter if in this nothingness there was something or not. According to the ancient ones, that nothingness was “Dark Erebus” and the “Dark Erebus” is perceived by the consciousness of a seer when s/he perceives the luminous egg. Before that, the perception is silent, then begins to sense something it can’t describe and therefore calls “Chaos”. Like modern science that puts the origin of the universe in the Big Bang, so Pagan Religion in Hesiod’s work puts the beginning of the history of life when the luminous egg explodes and Eros unfolds his golden wings.

Note: Quotes from Hesiod’s Theogony in this English version of my work are from Hesiod, the Homeric hymns and homerica translated by Hugh G. Evelyn-White in 1914. Though, where I thought it could be more adherent, I made some corrections to this very old translation, like writing Gaia and Uranus instead of Earth and Heaven